The latest news on the election of the President of the Republic of Belarus (by Minsk time).

20:05 Polls closed; the election commissions have started counting the votes

20:25 Alyaksandr Lukashenka has received more than 80% of the vote in the president election, say the relevant data of the exit polls announced by the Belarusian TV channels, BelTA reports. Three social research agencies conducted the president election exit polls in Belarus at the commission of the Belarusian authorities (the Sociology Institute of the National Academy of Sciences of Belarus, the Youth Laboratory of Social Studies of the Belarusian Committee of Youth Organizations, the Institute for Comparative Social Studies Eurasian Barometer).

19:10 As of 18:00 the voter turnout in the Belarus president election totaled 81.77%, the Central Election Commission says.

19:00 This year’s election is unprecedentedly popular: going to the polls, many people take the opportunity and do shopping at refreshment rooms which are laden of food products and alcoholic beverages at low prices.

18:15 Alyaksandr Lukashenka’s press conference. “I am ready for revolutionary reforms and changes in the economy!”

However, the incumbent president believes it is the nation that is ‘not ready’ for them.

18:20 There are written warnings against using mobile phones at polling stations in Minsk. The campaign ‘Right of Choice’ said on Twitter that the chairman of the 34th election commission barred independent observers from using phones.

17:20. Independence Avenue, the main street in Minsk, is almost empty; so are the surrounding streets. Have its residents gone out of the city or they don’t want to be mistaken for a protester?

16.00. In Pinsk the vote took place under the official flag which was hanged upside down.

15.30. In Hrodna Orthodox nuns cast their votes in the nunnery. Some of them are still hold passports of the USSR – and have no problems when they vote or receive pension payments.

15.15. Polling station Nr 42 in Mahiliou. “There are few people, neither customers nor saleswoman were present at the refreshment room,” our journalist reports.

15:00. Polling station Nr58 in Mahiliou. Independent observer Natallia reports violations: according to her, the number of voters is questionable, the room where the ballot box was placed was not sealed – a policeman stayed there overnight, which could provide an opportunity to fake the results.

After the complain was filed, the situation changed for the better.

But the local election commission has neglected the cases of several persons’ presence at the voting booth. Independent observers also repeatedly paid the commission’s attention to the fact that there were names of the dead on the voting list.

14:35. Presidential candidate Tatsiana Karatkevich has expressed hope that 35% of Belarusians will vote for her. The woman is not going to organise any protest action after today’s election.

13:10. Belarus President Alyaksandr Lukashenka swears that he has never discussed the deployment of a Russian airbase in Belarus with Vladimir Putin.

“I have not discussed this problem with Putin. I swear! This piece of news has been played up by mass media probably from a session of the Russian government for the sake of leaking it to the public for some unknown reason,” he stated after casting his vote at polling station on Sunday.

“If Russia sees what we fail to see (although we are closer to the West than Russia, we see more than Russia does), then Russia will tell us so. We may be wrong about some things If the military air force is a problem, then the question will be asked straight away: please, give us these 24 aircraft. If you don’t want to give them away, sell them or lease them,” state-run news agency BelTA quotes Lukashenka.

13:00. Presidential election in Belarus has been recognized as valid, state-run news agency reports with reference to the Central Election Commission. At 12:00 voters’ turnout was 51.2%.

12:50. In the Belarusian city of Brest the ballot day is with great fanfare. Near Almi store (Moskovskaya street ) a military band is giving a concert. See photos of polling stations Nr 34 and Nr 35 which are located in School Nr 10:

“The most important thing is that we will draw a bottom line of the elections with dignity. If I lose, I will be honest and say that I have lost. If someone else loses, they should sincerely admit it,” European Radio for Belarus quotes him.

At the same time, Lukashenka addressed pro-opposition citizens and warned them against protesting after today’s election.

“Even when they [opposition activists] took to the streets in violation of our laws yesterday, there was not a single policeman. I firmly demanded that no one should be touch before the election. But the election is to finish today at 20:00. I warn you – start living in accordance with the law!” he said.

He also said that there are just ‘400 oppositionists’ of 10 million Belarusian citizens.

However, at the same hour the Belarusian leader stressed that this election and not only this event may bring improvements to the relations between Belarus and the West only if the West wishes it.

“Everything the West wished to see ahead of the presidential election in Belarus has been done. If the West wants to improve relations with Belarus, no one and nothing will hamper it,” Lukashenka told state-run news agency BelTA. 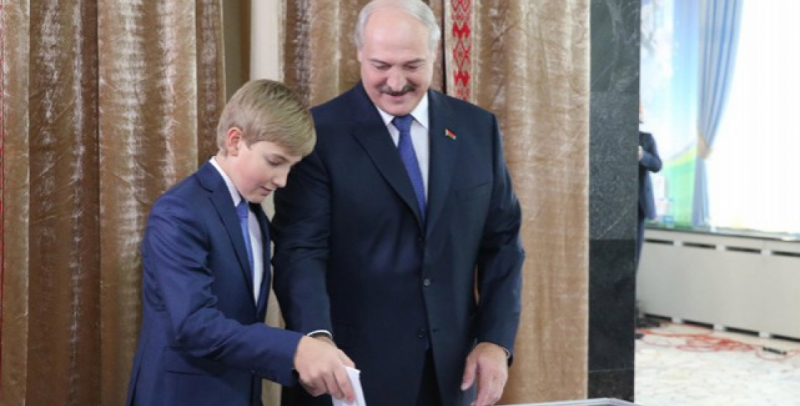 11.40. On the election day Mikalai Statkevich, a former political prisoner and 2010 presidential candidate, is busy with household responsibilities – he is putting potatoes into the cellar, RFE/RL reports.

“I do not think these polls are worth going to. It is obvious that there are no democratic candidates. And everyone realizes that early voting results have been unprecedently rigged,” Statkevich told Belsat TV on Saturday.

11:25. Meanwhile, in the run-up of the elections state-run TV channel Belarus-1 released a news item about ‘200 armed men from Ukraine’ who allegedly intended to enter our country.

11:00. This year early voters’ turnout has smashed all the previous records and reached 36%. The secretary of the Central Election Commission put it down to the ‘high activity of voters’.