“Cossack candidate” from Hrodna spoke to an empty room and admitted that he does not have support in the city.

Mikalai Ulakhovich is the second candidate, who recently met with Hrodna citizens. The main shock of the meeting came not from the ataman’s statements and not from the discussion, but from the number of visitors. Together with the trustees of the ataman and the OSCE observers in the hall of Chemical Technology College gathered as much as … 12 people. 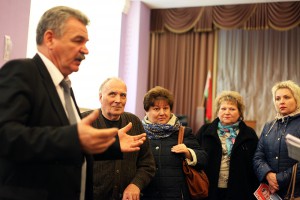 Ulakhovich and his team attributed this to the negative stance of the college administration, who allegedly did not allow to place posters in the lobby and put two guards at the entrance. They turned around curious students and directed them away from the meeting with the candidate. 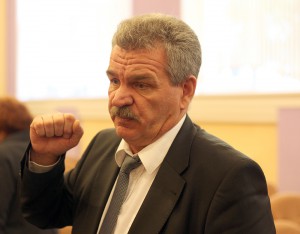 Due to this Ulakhovich made fun of those who call him a pro-government candidate: “Does that look pro-government? People in power usually support their own kind.” 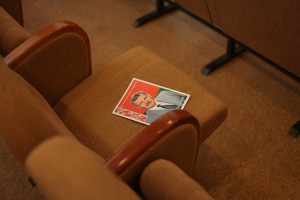 However, the meeting was held, and Ulakhovich voiced his views on the most pressing geopolitical issues. Below is a selection of quotations.

Cossacks is not a nationality. In Hrodna you have festivals, where participate Uzbeks, Tatars … I have great respect for these people. But the Cossacks is not a nationality. And when they are walking with other nationalities in one column – these are not the Cossacks, but clowns. After all, I’m a Belarusian – a Belarusian cossack. He’s Russian – he is from the Don area, Kuban etc. But walking next to the Uzbeks, sorry … We are a class, but not a nation. Just like priests. 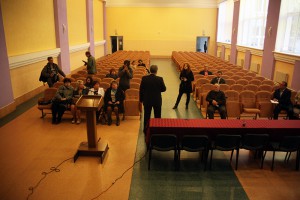 I am a pro-Russian candidate by mindset. This does not mean that Russia is financing me. I fund myself. Otherwise, I would not be standing before you…

Russia is our strategic partner. Some people talk about military bases… Why have bases, if we are military partners? Our military alliance is led by the general command. It’s funny, who came up with the bases? We have long been a single army. 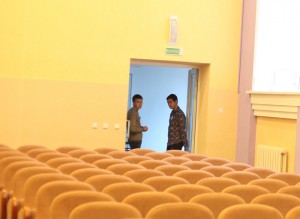 Belarus will not be accepted into NATO, even when the president changes. There are plenty of similar examples. Even Ukraine is not a member of NATO!

On the “province of Belarus”

Russia does not need a “Province of Belarus.” Why would it lose an ally in the UN? If it did need one – there would have long been this province! There are no problems with that. It’s a huge country and it must be said that the Russian imperial “habits” survived.

DPR and LPR are Russian mistakes. I agree about Crimea — Putin deserves credit for it. It had to go to Russia, there are a lot of important nuances. 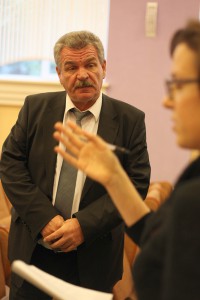 We do not need war. I am opposed to our guys fighting in Donbas and … anywhere else. But if that happens – I’ll be the first one to … and we’ll see where the today’s opposition will be, the so-called patriots, and where Ulakhovich will be.

… I’m not offended by the Hrodna people! But here is a young man, two young men. They would not let anyone in the room. Teachers ordered them not to let anyone in. My trustees looked into it, but they will not fight with the administration of the college. What a trick… This is not my audience, so I will go on and speak in other places.