‘Lukashenka Is War’. Protests against Russian military base in Belarus

The third public meeting organized by former political prisoner Mikalai Statkevich took place in the center of Minsk on Sunday evening. The participants were protesting against the presumable deployment of a Russian military base in the Belarusian city of Babruysk. In the course of the action the opposition leaders announced the creation of a new movement in support of the statehood and independence of Belarus.

In general, it was hard to understand that the event was devoted to military bases – there were only several posters on the subject. There was nothing new in the speakers’ rhetoric –  those in power are not elected, the Belarusians have no bearing on their decisions, they said. Statkevich reiterated that as such actions had not been held in Minsk for five years, the fact of its holding was something anyway. Signatures under the petition against a Russian base were collected, but people hardly felt much excitement over it. Meanwhile, Yury Hubarevich, Deputy Chairman of the movement ‘For Freedom!’ said that hundreds of thousands of Belarusians would take to the streets in the case of deploying a base in Belarus. But today only about five hundred persons came.

‘Lukashenka Is War’ – with the help of this new slogan one can briefly describe the content of all the speeches. Former political prisoners Mikalai Statkevich, Zmitser Dashkevich, Pavel Sevyarynets, civil activist Franak Vyachorka, politician Alyaksandr Milinkevich, writers Adam Hlobus, Uladzimir Arlou were present at the action. Compared with the previous rally, the turnout was the same – calls to take friends and relatives to therally met with failure notwithstanding the fact that the weather was fine. 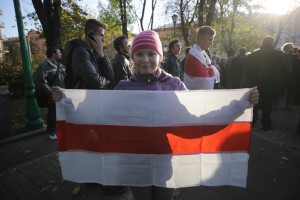 In social networks activists also called to take more national symbols to the action. As a result, a dozen white-red-white flags, several EU colours and a big flag of ‘Young Front’ were waving. Invitations to another rally which is to take place on the eve of the presidential elections were distributed.

Many passers-by were taking selfies on the background of flags. But they were not listening to the speakers – in order to hear them one had to make their way into the crowd.

All considered as members of new movement

The sight of police officers gave life to the action: the slogan ‘Shame!’ addressed to them was being chanted louder than those against a Russian air base and even traditional ‘Long live Belarus’.

The participants of the rally adopted a resolution that would be sent to the Belarusian government – to favour it, the people raised their hands. Furthermore, a new movement ‘For the statehood and independence of Belarus’ was established at the meeting – in the same manner, by putting hands up.

But one cannot say that it came out of the blue; Nyaklyayeu announced its founding in May, the constituent assembly was held then.

Its main aim is to protect the country’s independence. The founders are set to a broader front of the struggle for Belarus.

The next meeting is scheduled for October, 10. It might become the last political action on such a scale of this season. What to say after the election, and whether people will listen to it –that is a question.

It is still unknown whether there will be something new and whether the event will be organized under a different scenario. But today no one discussed the possibility of ​​a multi-day protest action.

Tags: Nyaklyayeu, protests in Minsk, Russian military base in Belarus